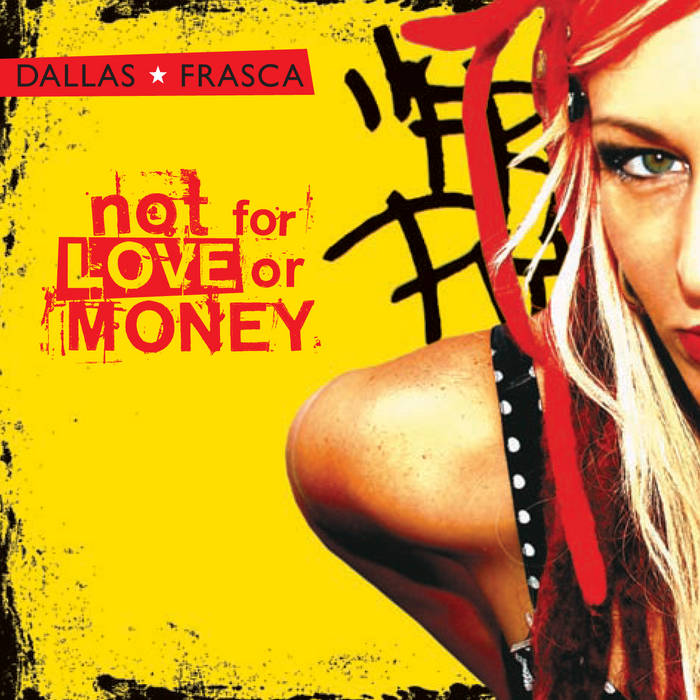 It's no surprise that "Not For Love Or Money", the debut album by Aussie roots/rock powerhouse Dallas Frasca has a sense of exhilaration and dynamics throughout. That's because Frasca and her partner in crime, Jeff Curran (guitarist) wrote the tracks during a heavy-duty bout of touring. "It was recorded in five studios around the country over an 18 month period - and was basically written to have an empowering impact on the listener," reveals Frasca. "Not For Love Or Money" lives up to that promise. It cuts a blue line through rock, roots, blues, soul and pop, while allowing Frasca to put a stamp on proceedings and add a sparkle to what goes down during her live shows. Frasca co-produced it with Forrester Savell (Helmet, Karnivool, Cog), and brought on board guest appearances by Xavier Rudd, Adam Weston (Birds of Tokyo), Jacob Mann and Liz Stringer, to provide greater depth and flavours. Frasca is more than a performer with fire in her belly. She is also a story-teller. For instance, "I Like You Better When You're Straight" (the first single) is about "those friends, usually cool and together, who suddenly morph into idiots when they're out of it - and we all know someone like that!" "Loaded Silence" was inspired by the time Midnight Oil invited her to play with them last year. "It allowed me to mingle with the activist minds of great songwriters such as Rob Hirst and Jim Moginie. The song reflects my realization there is a lack of documented truth about this country." The pop-tinged singalong "Til' The End I'll Walk Proudly" touches an issue that strikes a chord with her audience - "The overwhelming contentment you feel when you are with someone right. It doesn't matter what happens next.... this is the right time, right place, right person." Frasca was born in Adelaide but grew up in Wangaratta, the daughter of a truck driver and hairdresser who loved music. Records played constantly in the Frasca household. Then came that moment when it all kicked in. She recalls, "When I was 12 years old, I watched a film called 'Crossroads', based on the myth of Robert Johnson - music by Ry Cooder - and was blown away by the love, emotion and expression in the soundtrack of this film. I remember wagging school the next day and watching the film over and over again... that music is embedded in me. And it was from there that I got into heavy rock, metal and soul." By 18 she was on the road, displaying a sass and irreverence onstage reminiscent of Chrissie Amphlett or Suze Demarchi. Always an outlandish dresser, her bright red dreadlocks made her stand out (although they've also been purple, black and rainbow). The grunt in her voice was inspired by Aretha Franklin and Betty Davis. Then tragedy struck. She developed nodules on her throat and told not to sing for 18 months. "But it was actually a blessing," she insists. It forced her to spend more time listening to great records, and also teach herself how to play guitar. The players who inspired her guitaring - Duane Allman, Bob Brozman & Mississippi Fred McDowell - were those who had a penchant to break the rules. In 2006, she won Triple J's "Light Your Fuse" competition from over 500 entries. Her career exploded from there. Two songs hit the top position on MP3.com, she released an EP, major festivals invited her to play (such as Falls, Bluesfest, Pyramid, Festival of the Sun, Queenscliff, Southbound, and massive European festival (“ Blues Passion Cognac). At every festival, Dallas is always amongst the highest CD sellers. In early 2009 Dallas was invited to perform as one of seven artists from seven continents of the planet for International Earth Day in Montreal. It not only allowed her the thrill of holding a dialogue with fellow-artists about social and environmental issues, but she caught the ear of Canadian promoters who have invited her to come back and tour there. "Not For Love Or Money" is the sort of record on which each listener will find a highpoint moment. But it creates a solidarity with its audience because is made by a performer who quite clearly lives and breathes music. It marks an exciting new career milestone for Dallas Frasca. w w w . d a l l a s f r a s c a . c o m